Twitter now has over 500 million users and is still one of the fastest growing platforms in the world. As it continues to expand people are keen to get involved and jump on board with the popular communication platform.

Pew Internet recently conducted a study on Twitter usage and discovered that 15% of online adults use Twitter and 8% of them do so every day with 26% falling into the age bracket of 18-29 – who wouldn’t want to target this audience?

There are 3 main Twitter advertising options that enable you to target current and potential customers in an attempt to increase your business awareness:

A promoted account will feature in the “Who To Follow” section on the left hand side of your screen as well as in search results. 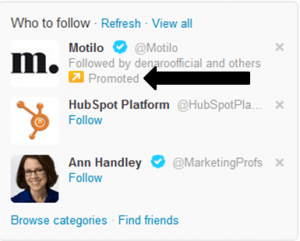 Users are given these suggestions based on who they already follow on Twitter. When you promote your account, users who follow similar accounts will be given the suggestion to also follow your account. The similarity between accounts is determined using a variety of elements including interests of a user and the demographic they fall into. This product helps you to scale a good follower base of new users and potential business.

Promoted tweets have been very financially successful for Twitter. They work in a similar way to having a promoted account. Twitter will promote your best tweets to a specific audience identified to be appropriate to follow your business. Anyone who appears to be interested in your industry could see your tweet. 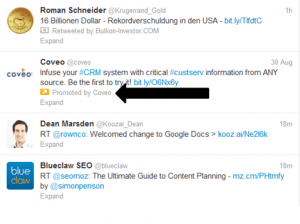 You can use promoted trends to capture the attention of a user on Twitter. Use a trending topic to drive interest and engagement around your brand or product you want to promote. The promoted trends will feature above all the natural trends in the side bar on the left of the timeline. These trends will be tailored to display to Twitter users depending on who they currently follow and their location. 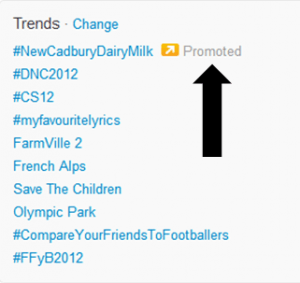 What Are The Benefits?

What Are The Negatives?

So the big question is: “Is Twitter Advertising really worth it?”