Although many are now wary at the thought of using Wikipedia as a credible source of information, with many journalists having been caught out by its inaccuracy in the past, today more writers are beginning to turn to entertainment site Reddit as a primary source of information.

Though the idea is nothing new, with many journalists having realised the power of social media many years ago, more front page stories are appearing that were originally found on what is claimed to be “the front page of the internet.”

So can you find a decent story on Reddit?

Intriguingly, despite initial reservations, the idea of coaxing a story from the site is becoming accepted practice among the media.

Bobby Ellis of Storify says that:

“Reddit can be used as a place to pull decent information and as a way of covering stories in a more in-depth way, with reporters interacting with users as the stories are updated and added onto.

“I consider myself a complete idiot when it comes to the world of professional bicycling, but thanks to the users of Reddit, I feel like I could make a decent case for Lance Armstrong deserving to be banned from the sport.”

It is true that thanks to its construction, Reddit yields a whole range of categorised topics (otherwise known as subreddits) where journalists are free to explore their topic by the people – not the brands – that use them the most.

For example, if a journalist was writing about the weather, he could search /r/weather and if he wanted to confine this news to a country he could find more in /r/unitedkingdom. Not only that, but if he wanted to get the opinion of the people who are most likely suffering from those weather conditions, he could simply take a look in /r/britishproblems.

The great thing about it of course is that if the information required is not there, the journalist is free to simply start a topic by submitting a post to the relevant subreddit.

Though a journalist can make great use of Reddit, actually submitting their work can be dangerous, as users (otherwise known as Redditors) are unforgiving if they are presented with a piece of subpar content; though it can work.

Even Hollywood actors, such as Woody Harrelson, have found this out to their detriment.

One of the many dangers of Reddit, much like Wikipedia, is the fact that anyone can publish links to the site in the hope of having their content seen and it making the fabled front page. The problem is that unlike Wikipedia what they enter doesn’t have to be accurate, truthful or even real.

“Ingram points out that the worst inaccuracy to come out of the coverage was ABC’s claim that the gunman was a Tea Party member, but the Reddit thread contains major errors about the numbers and identities of the dead and the motivation for the shooting, as well as a large number of kitten pictures.

“The ABC flub was a bigger deal only because it was more visible; were Reddit to become a regular source for news, such errors would be magnified as well.”

In the UK, one of the largest newspapers to use the site as a source of information is the Daily Mail, something that Redditors are well aware of.

In October 2012 the newspaper wrote an article concerning a ‘creepshot’ subreddit, where users posted images of women taken without their permission. The paper claimed that at least 40 per cent of the women found on the subreddit were under-age.

They wrote this of course while using and publishing the images for their own article.

But how easy is it to purposefully misinform newspapers?

As an experiment earlier on in the year, one Blueclaw employee purposefully posted inaccurate information concerning canal workers in Leeds, to see if the article and information would be picked up by the media.

Purposefully naming the canal workers as ‘fireman’, the relevant link was posted to the United Kingdom subreddit on the 21st of January 2013. 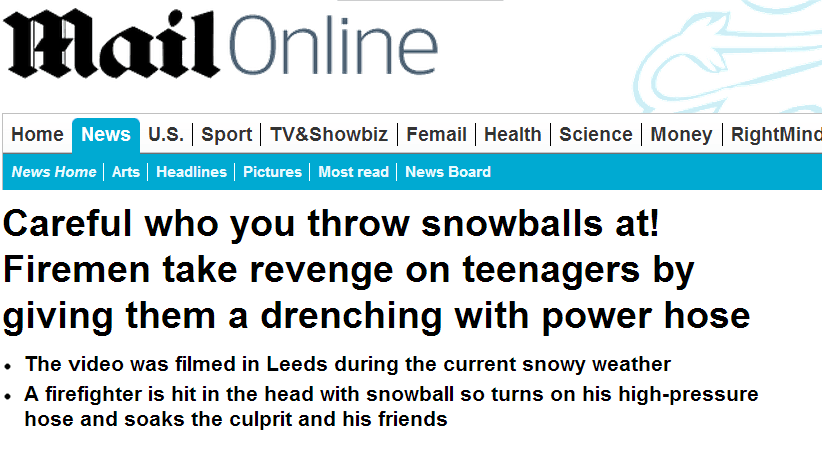 Within a matter of hours, not days, the story was picked up by the Daily Mail, complete with the innacurate information. This suggested that very little, if any research, had taken place during the writing of the article.

Though it is rather unlikely that people will post links or articles to the internet with the intention of falsyfing information to deliberately mislead media organizations, it is important that any journalist or media professional seriously considers the risks of using Reddit as a primary source of information for any article or content piece.