Recently the world of online recruitment was rocked by Google’s unveiling of the Google for Jobs initiative. GFJ was launched in the US on 20 June, though the UK release date is yet to be announced.

[ 2019 Note – to read the latest insight on Google for Jobs and other digital strategies, read this post – The Future of Digital Recruitment – ]

This is arguably the biggest ever development in the history of online recruitment.

That the vast majority of job searches start via search engines rather than within job sites themselves is something that employment portals have learned to deal with. Google for Jobs now presents the possibility that Google will hang on to those job hunters through their own service.

It comes at a time when the job search and recruitment industry are growing at record levels and competition is at an all-time high.

But what does GFJ mean for the major job site players?

To try and answer that question, we’ll need to look a little further into what GFJ actually does.

How does Google for Jobs work?

For search queries with clear intent – such as “catering jobs in New York” or “part time jobs near me” – Google now displays their own job listing’s preview at the top of the page, and each job can expand to show more details.

Job sites can integrate with Google for Jobs my marking up their job listings with Job Posting structured data and submitting a sitemap to Google. However, many privately and publicly wonder if collaborating with Google in this way is making Google stronger and employment portals weaker.

Many in the recruitment sector are speculating that executives at Indeed in particular are less than pleased with the news, though the job search giants have themselves played down these concerns.

Indeed have long been accustomed to ranking top of Google’s SERPs organically for most (if not all) of the industry’s key money terms – “jobs”, “job search”, “jobs near me” and so on.

However, they’ve now lost much of their previous search engine visibility for many of these types of terms, as the screenshot below demonstrates for the search term “jobs near me“: 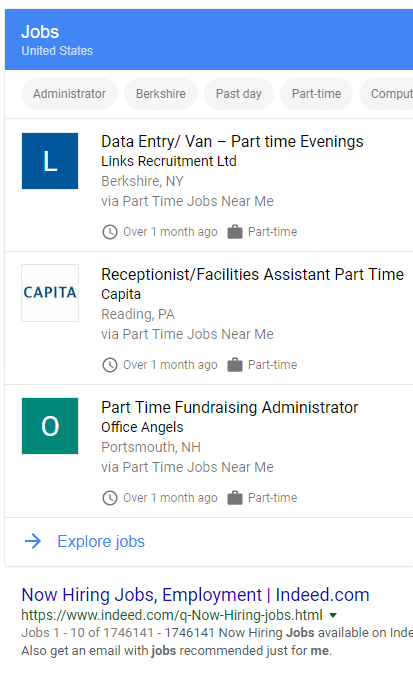 Not only are job sites like Indeed now competing with Google for Jobs for these important search terms – they are often pushed even further down by Google Ads.

According to a 2016 study by Careerbuilder, 75% of job seekers start their job hunt through a search engine.

This raises an important question: is SEO still going to be a worthwhile pursuit for UK job sites when GFJ hits our shores?

The straightforward answer to this question is yes. Here are the main reasons why:

The likes of Indeed will be the most affected by the changes. That being said, there are a few things UK job sites relying on organic search should be doing to minimise any potential loss in traffic.

No one, save for maybe a few Google insiders, currently has any idea when Google for Jobs will be rolled out in the UK. This makes it difficult to plan for. However, it’s been estimated that over half of the UK’s top 100 recruiters aren’t “Google for Jobs” ready.

This being the case, SEO professionals and marketing teams at major UK job portals should learn from how the US market has been affected to anticipate what the outcome could be over here and plan accordingly.

One of the best ways to prepare is to build the brand of the job site. As we shall see later, some sites like Indeed are large brands which get enormous amounts of both organic and branded traffic. As such, they have a lot of brand recognition and customer familiarity (if not loyalty) to work with.

Others, like CV Library, are also large brands with vast amounts of branded traffic but significantly less organic. Ergo, it’s sites like Indeed who currently dominate the SERPs which could stand to lose the most since they face the prospect of losing vital real estate to Google’s latest feature.

SEO showdown: How do UK job sites compare in SEO?

Unquestionably, there will still be huge benefits for whichever job site is able to rank on page one for the industry’s major terms.

Though this will almost certainly be made harder in the future there are, it seems, still nine organic results one page one for most if not all terms in which Google for Jobs is displayed.

Due the fact SEO will still be a vital part of most job sites’ strategies post GFJ, it’s worth taking a closer look at how the major job sites currently measure up in this regard.

Below is a table which looks at how ten major UK job sites compare:

As you’d expect, Indeed set the pace by some distance. Whilst Reed may come above industry front-runners Indeed in terms of MajesticSEO’s Trust and Citation Flow as well as referring domains, Indeed’s search engine dominance is obvious.

In terms of branded traffic, only seven sites pull in more than 100,000 searches, with CV Library and Total Jobs in joint third place behind Reed.

Sites that lack the same levels of brand recognition, such as Fish4 and Adzuna, are forced to compensate by relying on non-branded keywords to compete.

The main takeaway though is that Indeed are significantly ahead in terms of their organic traffic and the number of keywords they rank for.

How does Indeed do it?

The strength of Indeed’s organic presence lies in its success in ranking for pretty much every long and short-tail keyword around the word “jobs”.

For instance, Indeed rank #1 for “full time lorry driver jobs in leeds” as they do for “SEO jobs in Edinburgh”, as well as pretty much any other job-centric term you could care to think of. Pretty amazing stuff when you think about it.

The brand’s onsite and offsite strategy are crucial to this. Here are some of the key takeaways:

The success of Indeed’s SEO strategy, as the above metrics demonstrate, mean that this is unlikely to change in the foreseeable future.

Despite this, there’s still huge benefit in job sites ranking on page 1 for these search terms.

With competition fierce, the difference between consistently ranking a place above a competitor for job related queries is huge for a brand’s bottom line.

However, when it boils down to the industry’s largest non-branded “money terms”, Indeed don’t completely dominate the SERPs, as the below table demonstrates:

This further shows that there are still plenty of opportunities out there for other savvy job sites to increase their organic search traffic.

What about mobile and site speed?

Other major factors yet to be discussed include page speed and mobile friendliness. Most of job site traffic now comes from mobile. In other words, sites which don’t adequately invest in mobile are doing the SEO equivalent shooting themselves in both feet with a Kalashnikov.

Don’t believe me? Take a look at the table below and consider how Indeed dominate once again. 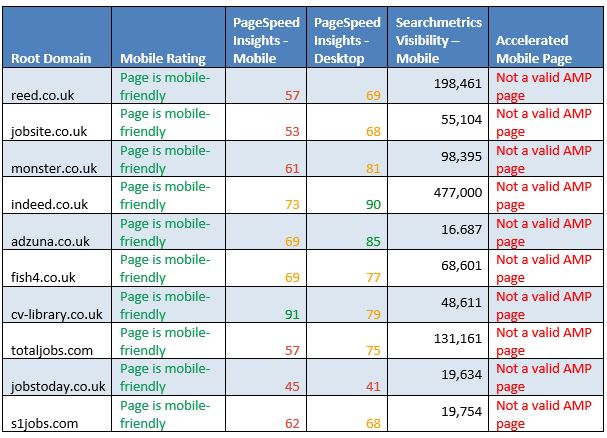 As far as mobile search goes, Indeed are well ahead being more than twice as visible as nearest competitors Reed. After Reed, Total Jobs and Monster come in at third and fourth place respectively.

Most of the sites on the list, except perhaps for CV Library, have scope to improve their page speed for mobile. Despite that, all the sites are deemed to be ‘mobile friendly’ showing that the major sites at least appear to understand the importance of ranking on mobile for their overall SEO strategies.

What conclusions can we draw from all this?

2017 has been a big year for the job search industry. Possibly even the biggest. Time will tell what the introduction of Google for Jobs in the US heralds. Whatever the case, it’s certainly a game-changer and this will be the case when it debuts in the UK too.

This means that job sites need to focus more not less on their SEO. Why? Because there are still plenty of great opportunities that exist for the major sites to significantly increase their rankings and organic traffic. This is true even if if it’s unrealistic to assume they can knock Indeed from their perch and in spite of GFJ’s impending UK launch.

It should also be remembered that the job sites that appear on the above lists don’t all do the same things. Indeed, Monster and Adzuna are all job aggregators and differ from CV Library, Total Jobs and Reed which are, among other things, job boards.

We know that the vast majority of job seekers still start their search in Google. This isn’t going to change soon. Job sites should still do all they can ensure that they have as visible a presence in the SERPs as possible.