In July this year 6.9 million people left the UK to travel abroad and as many as 76% of people booked their holiday online in 2016.

These developments have led to a huge increase in competition in the online space as major booking sites as major brands do their upmost to cash in on the online booking craze. This is particularly the case when it comes to aggregators and comparison sites.

In recent years price comparison sites have continued to go from strength to strength as they try to get in on the travel market action.

These four sites offer users the option to search separate listings for holidays flights, hotels and holidays and so on.

They offer a contrast to the likes of Thomas Cook and Thomson which continue to leverage the strength of their branding to dominate the search engines despite still remaining more traditional travel agencies.

The continued rise of these major comparison sites has further complicated matters.

Once upon a time, holiday goers would visit a local travel agent to arrange every aspect of the holiday – from the accommodation to the flights. Now though, most people rely on the internet to arrange their getaways.

In 2017, most holidaymakers expect to sort out every aspect of their holiday on the same website. What’s more, they want to compare the best deals out there with the least amount of hassle possible.

All of this means that when it comes to SEO, we have many sites that do very different things competing for the same keywords.

In other words, we have a type of Venn Diagram situation here where the priorities and objectives of many businesses overlap without always fully converging.

Much like price comparison sites, job search aggregator or property portal sites, Google also understands the consumer’s desire to find everything in one place when it comes to search.

And, as we know from the introduction of Google for Jobs this year, they’re not afraid to muscle in on the action in a number of verticals.

That’s precisely why they introduced Google Flights in 2011:

People typing in any air travel-related keywords – e.g. “Leeds to Madrid” – will be presented with a panel like the image above.

If they hover over the sponsored icon on the top right of the panel, they’ll see that Google themselves profit from listing providers in this special SERP feature.

Whilst this is good for Google, and good news for consumers looking to find the best and cheapest flights with minimum hassle, it’s less good for sites like Skyscanner and Expedia whose CTRs suffer through this decrease in visibility.

Whilst portals like Booking.com deal with separate listings for hotels, flights, car rentals and so on, Expedia allow provide users with the full gamut of travel-related services.

Sites like lastminute.com, booking.com and Expedia face similar challenges from Google when users search for hotels. 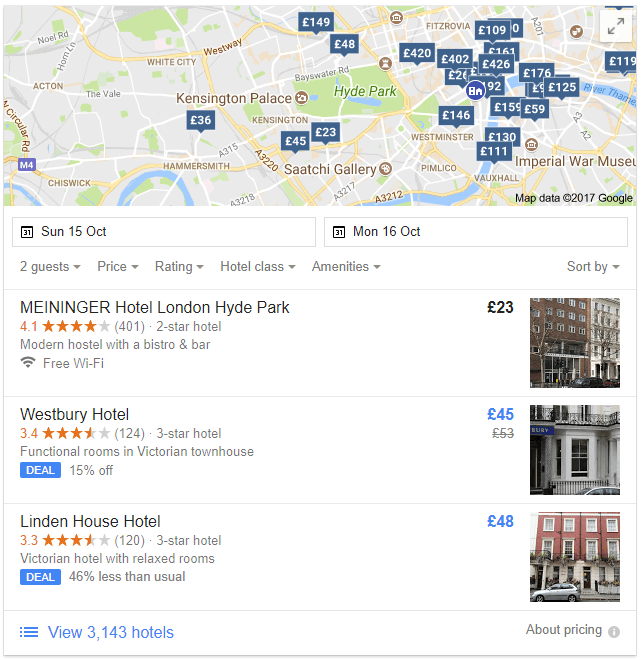 Google Hotel Finder has been around since 2011 and works when people type in a phrase it deems to show intent to book a hotel e.g. “hotels in London”.

As seen in the above image, users are shown a panel where they can browse hotels.

Hidden underneath this panel (and four Google Ads) you can find the first organic result lastminute.com – which is roughly a half-way scroll down the page.

How are the major brands affected?

So, what do Google Flights and Google Hotel Finder mean for the major brands?

If you’re Thomson or Thomas Cook not a great deal. However, for price comparison sites the situation is slightly different.

The existence of Google Flights and Hotel Finder are partly why comparison sites pay so much on branding, Adwords and targeting other niches like travel insurance, loans, broadband, energy suppliers etc which Google hasn’t cut in on

So that’s enough of an introduction. What does the data say?

Who wins when it comes to traffic?

When it comes to competition for keywords, there’s no shortage of opportunities.

We’ve already seen that searches for individual flights and hotels offer less chances for businesses to capitalise on organic visibility.

However, this isn’t the case for searches around the term “holidays” and SEMrush data shows nearly 6738 results for phrases related to the search term “holiday offers”.

So with this in mind, here’s a list of ten of the major sites that garner the most traffic around the term “holidays”:

As we can see, some of these sites like travelsupermarket.com are price comparison sites who are competing for traffic with travel operators like Thomson.

Most people in the UK will instantly recognise the above brands, which explains why many of them have such elevated levels of branded traffic. Easyjet.com and Thomas Cook lead the branded traffic stakes in first and second place respectively.

As far as keywords go Expedia leads the way with 884,007 keywords. This is unsurprising as they target multiple verticals as we know from earlier.

Interestingly, sites such as easyjet.com and Thomas Cook both come out in the top four for organic, despite having the lowest numbers of indexed pages on the list.

Thomas Cook has only 16,600 pages compared to over 35,000,000 for onthebeach.co.uk. However, they received nearly twice as much organic traffic from Google.

This reflects Matt Cutt’s comments four years ago that there’s no correlation between a site’s rankings and the number of pages it has indexed.

What do the link metrics tell us?

Unsurprisingly, there is significant correlation between the sites’ link metrics and their positions in the rankings, as the table below demonstrates:

Easyjet.com have by far the highest Majestic TrustFlow and generate the second highest levels of organic traffic.

Whilst onthebeach.co.uk and travelrepublic.co.uk – which have the lowest levels of Domain Rank/Trust Flow – are far behind the more recognised brands with higher levels of authority.

The top five organically performing sites also generally tend to have a much higher number of referring domains.

It’s worth pointing out that Thomson and Easyjet – which both top the organic charts – also run away with the competition in terms of links pointing to their site (Thomson is top here with over 25,000,000) and in terms of referring domains (Easyjet wins this one with over 42,000).

And it’s no shock that these two sites also score highly when it comes to mobile.

Who is the champion of mobile?

Page speed is of course a significant Google ranking factor. The rolling out Google’s Mobile First Index further underscores how far mobile has come along. With most search traffic now coming from mobile, businesses that ignore optimising for mobile do so at their own peril.

When it comes to desktop speed, Thomas Cook and Expedia are the two front runners.

Lastminute.com come up top trumps when it comes to SEO visibility for mobile. The fact it ranks for so many keywords and targets such a wide range of niches doesn’t seem to do them a disservice here.

However sites like onthebeach.co.uk, which perform well when it comes to overall organic, fare less well relatively speaking when it comes to SEO visibility for mobile. The fact they’ve been given a Google PageSpeed Insight score of 19 for mobile shows that they have a lot of scope for improvement when it comes to mobile optimisation.

What does the future hold in this niche?

Price comparison sites will no doubt be feeling the heat when it comes to the possibility of Google adding yet more features to the SERPs which could have a deleterious effect on their visibility and eat into their profit margins.

Traditional travel operators like Thomas and Thomas Cook are lucky in this sense as the market and keywords they target aren’t affected in the same way.

As mentioned previously, job sites like Indeed, which act as “search engines within a search engine” have suffered from the introduction of Google for Jobs. For the first time, they’re probably experiencing something similar to what booking.com or Expedia must have felt when Google Hotel Finder was rolled out a few years back.

Google has demonstrated time and time again that they aren’t afraid of disrupting the market by offering their own prominent comparison features to grab a slice of the action in many competitive SERPs.

Many price comparison sites must be wondering if something similar will ever happen to searches for car rentals, travel insurance, bank services and so on.

This leaves us with an important question: what should these types of sites be doing if the worst happens?

The two single most effective ways of price comparison sites dealing with this are adding listings for an increasing number of verticals and making sure their SEO is up to scratch.

This is because the more verticals price comparison sites offer, the less chance there is of Google impeding on all of them and damaging these sites bottom line.

By optimising for as many separate listings as possible, price comparison sites can avoid the fate that’s befallen the like of Expedia.