Ensuring that people know about your business is key to success. If people can’t access information about your business and what services you offer then it’s unlikely you’ll get their custom. This is why marketing campaigns are essential. A well-considered campaign can offer you the further growth that your business needs.

But what if a campaign doesn’t go as well as intended? In this post, Blueclaw will look at the risks of a marketing campaign and how to avoid damage to your company’s reputation.

There are numerous examples of bad marketing campaigns that, despite best intentions, have irreparably damaged a brand’s reputation and dissuaded existing and potential customers alike.

This campaign was announced ahead of the 2018 tournament in Russia and despite not officially being linked to the World Cup, Mastercard promised to provide ten thousand meals to children in Latin America and the Caribbean for every goal scored by Messi or Neymar, until 2020.

The campaign received backlash across social media, with people commenting that Mastercard were effectively turning the star players’ campaigns into ‘The Hunger Games’. Many argued it was unfair that if either player missed a goal, underprivileged children would go hungry.

This widespread criticism caused Mastercard to alter the campaign, replacing the ten thousand meal donation per goal to a sole contribution of two million meals in 2018. 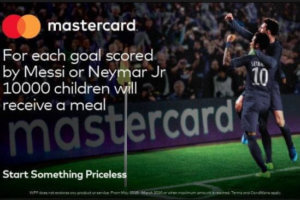 The video campaign, featuring model Kendall Jenner, was used by Pepsi to encourage people to ‘live for now’. The advert showed Kendall halting a protest march by offering a policeman a can of Pepsi, causing the campaigners to stop protesting and instead start celebrating. The video included music from Bob Marley’s grandson, Skip Marley, seemingly connecting the campaign to America’s politically active younger generation.

The video was met with massive criticism from the public who believed that Pepsi were trying to capitalise on the ‘Black Lives Matter’ protests that were ongoing in America at the time.

Despite initially labelling the campaign as “a global ad that reflects people from different walks of life coming together in a spirit of harmony”, Pepsi pulled the campaign after just one day of distribution in an attempt to prevent any further reputational damage. 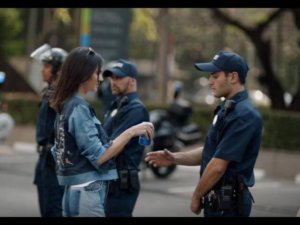 When a company launches a campaign across numerous regions, they have to take into consideration factors such as different religions, beliefs and local dialects. When Nivea posted its social advert promoting its invisible deodorant range across the world, including the Middle East, with the tagline ‘White is Purity’, backlash was inevitable.

Unsurprisingly, people immediately labelled the tagline as racist and began calling for the advert to be pulled.

Nivea responded to these concerns by immediately removing the advert from social media. Despite being a localised advert, the public’s accusations of ethnic discrimination impacted Nivea globally, even leading to people drawing links between the campaign and several white supremacy groups. 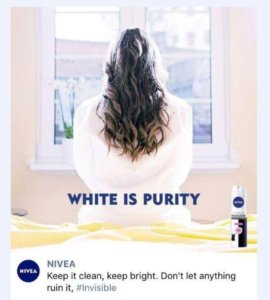 Depending on the actions your company takes following a failed campaign, reputational damage can be limited or eradicated. By ensuring you have a robust damage limitation procedure in place and taking on public criticism constructively as soon as possible, you could save your business from major reputational damage.

Causing a Stir without Permanent Damage

Some campaigns provoke mixed reactions without irreparably damaging a company’s reputation. These reactions cannot be categorised into positive or negative but are a combination of the two.

Boots – ‘Be Certain with Soltan’ 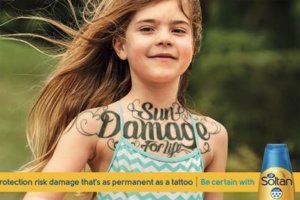 This campaign is a prime example of an advert causing a mixed reaction. In 2018, Boots launched its first campaign for its Soltan sun cream, designed to raise awareness of the dangers sun exposure posits to skin.

The advert featured children smiling in the sun with the tagline ‘sun damage for life’ tattooed on their bodies. It aimed to teach parents the differences between UVA and SPF, while teaching them that sun damage is as permanent as a tattoo.

These adverts received a mixed response; while some praised the campaign for raising awareness of sun damage, others claimed the advert contributed to the negative stigma surrounding tattoos. Although the social media response to the campaign was extensive, the negative opinions of the adverts did not damage Boots’ reputation.

Not all campaigns damage a company’s reputation and most come and go without issue. Here are a few of our favourite marketing campaigns that were received extremely well by the public…

The Deadpool 2 campaign is a perfect example of the high budget advertising spend of blockbuster films. Deadpool is a comic book character who regularly breaks the ‘fourth wall’ by addressing film audiences directly – a move that was revolutionary for Marvel Studios and modern superhero cinema as a whole. As such, this unique character trait opened a multitude of avenues for promotional opportunities when marketing the film.

Many adverts, PR stunts and promotional material were generated to create hype and anticipation for the film’s launch. Examples include:

• The character appearing on the cover of Good Housekeeping magazine
• Marvel giving away free tattoos at Brazil’s Comic Con
• The studio releasing a colouring book on the fake holiday ‘National Crayon Day’
• Wolverine actor Hugh Jackman appearing in a YouTube video with Deadpool (Deadpool  considers Wolverine a close friend)
• Deadpool starring in the music video for Celine Dion’s ‘Ashes’, from the film’s soundtrack
• Actor Ryan Reynolds appearing on the South Korean televised singing competition ‘King of  Masked Singer’ as a sparkly unicorn
• Stores’ DVD and Blu-ray sleeves of other films changing to feature Deadpool as the main character

After the film launched, it took over $132 million in its first box office weekend. With a production budget of approximately $58 million, it’s fair to say that the marketing campaigns used in promotion contributed massively to the film’s success. 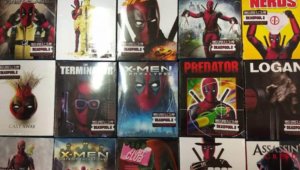 Not all advertising campaigns are to promote a product. KFC’s FCK campaign was designed as crisis management following its stores running out of chicken across the UK.

The print ads posted across stores and in national newspapers consisted of an empty KFC bucket with the letters ‘FCK’ printed in place of the usual logo. This simple and cheeky advert worked a treat, with customers expressing their love for the advert and subsequently forgiving the company for running out of chicken. The initial backlash that the company faced following the chicken supply issue was replaced with appreciation of the advert, successfully preventing any long-term reputational damage. Not long after the campaign, KFC promised to revert to its former distribution company to ensure no more chicken shortages occur. 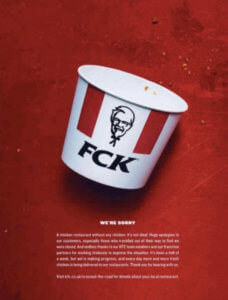 Greggs’ Valentine’s Day campaign is a perfect example of a company thinking outside the box and producing an advert completely different to its customers’ expectations. Most consumers view Greggs as a cheap place to buy something quick to eat, but its 2018 Valentine’s Day advert instead presented the bakery chain as the ideal romantic location. The campaign offered customers the chance to book a table in selected locations and enjoy their favourite baked goods with their loved one at a candlelit table.

The reaction from this campaign was extremely positive. Customers thought it was an original and clever move for the company to offer something completely different and provide a unique dining experience for Valentine’s Day. 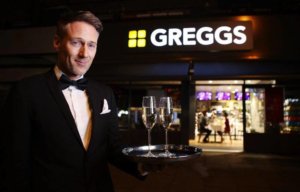 Prior to launching a new campaign, there are several different areas and questions to consider. By thinking about these areas, your campaign is more likely to have its intended impact whilst preventing any potential reputational damage.

When will it be launched? Are there any current events (positive or negative) going on that you could link the campaign to? Who will it be relevant to? Has all information been checked and verified?

What is your brand image? Is your campaign in line with this? Will it be what people have come to expect from your brand?

Who is your target audience? What are the Key Demographics? How will you reach these?

What is your message? Can this message be misinterpreted? What tone of voice should you use? Which content types are appropriate? Text? Infographics? Video? Social Media?

What are the goals for your campaign? Sales? Brand awareness? Traffic to your website? Links back to a website?

There are many ways to make a campaign successful and limit reputational damage, the easiest way being to listen to public responses and make adjustments accordingly. Although most campaigns are successful, it is important that you have an efficient plan in place to limit potential damage and ensure that your brand’s reputation remains positive.