Halloween is the best time of the year, and that’s a 100% indisputable fact. Okay, maybe it’s not for everyone, but there’s no denying that the spooky season offers some stellar marketing opportunities. In fact, new research from Mintel predicts that Brits will spend a staggering £419 million on Halloween this year, up by 5% from £400 million in 2017.

With Mintel’s research showing that a frightening 52% of Brits splashed out on Halloween in 2017 and 25% of purchasers spent up to £25 on treats, decorations and costumes, it’s not surprising that more and more big-name retail brands are coming up with inventive campaigns to market the most out of Halloween.

You’ll notice that almost all of the 2018 Halloween marketing campaigns discussed below are food-related. Is that just because I wrote this before lunch? Perhaps. But it’s also because confectionery is a firm Halloween favourite, with 40% of Brits purchasing seasonal sweet treats in 2017 and 11% indulging in frightening food and drinks for the home. 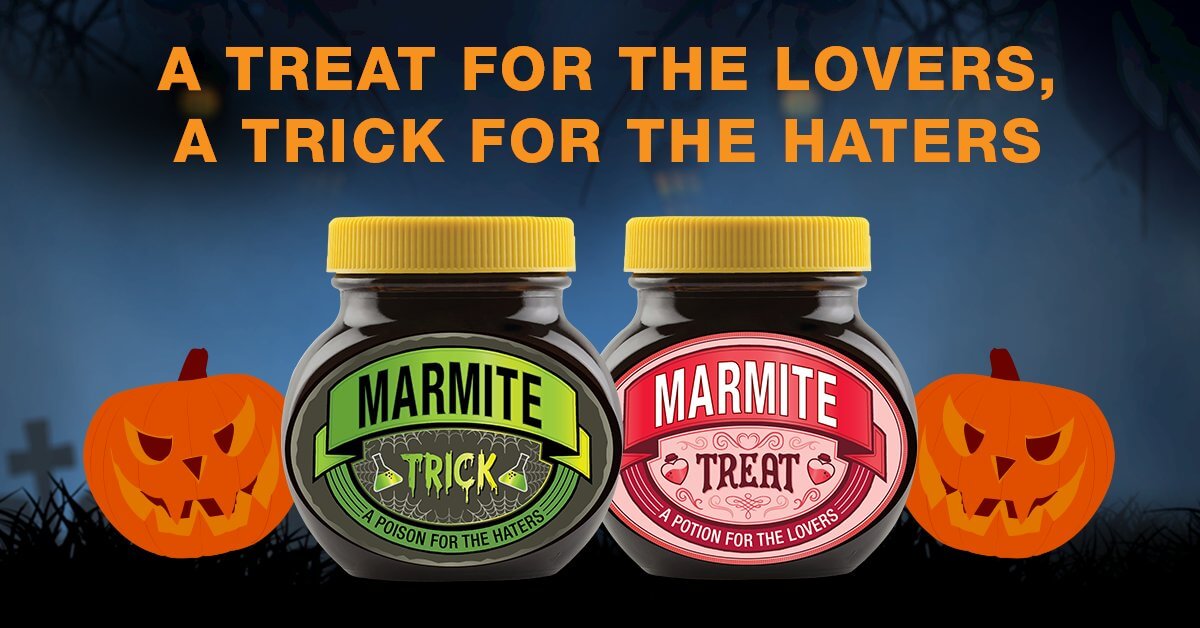 Marmite’s Trick or Treat campaign shows that you don’t need to go all out to drive brand awareness over Halloween – sometimes it’s all in the design. Capitalising on its reputation as a product people either love or hate, Marmite released two limited-edition Halloween jars, both of which can be personalised on its website.

Marketed as either a Trick to ‘poison the haters’ or a Treat ‘for the lovers’, the jars are considered highly collectible and are only available until the end of Halloween. The beloved brand is well-known for its collectable jars, with popular iterations including a trio featuring winning labels from the 2017 Art of The Jar competition in South Africa, a Guinness tub and a hippy-inspired Summer Love jar. As for the reaction to this campaign – people seem to either love it or hate it. 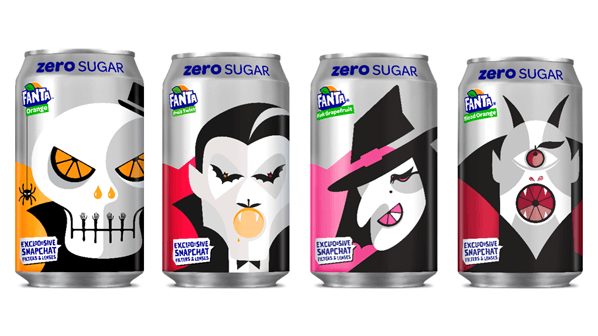 The Fanta Halloween Snapchat campaigns are a great example of how an established brand can utilise social media and user-generated content to drive sales over the harrowing holiday season.

Simon Harrison, customer marketing director GB at Coca-Cola European Partners, said: “Like Coca-Cola is to Christmas, Fanta is to Halloween and the brand is a key driver of soft drinks growth during the Halloween period. In fact, last year Fanta grew by 23% in convenience during Halloween and this was accelerated by more consumers picking up Fanta Zero than ever before.”

This Halloween the creepy cans and freaky filters are back and better than ever, with two new frightening flavours added to the limited edition line-up. Back in April, the brand invited fans across Great Britain to vote for two new Fanta flavours and after receiving a staggering 150,000 votes from the pop-loving public, blood orange and pink grapefruit joined the Fanta family exclusively for the spooky season. The reaction from this campaign has been fangtastic so far, with users sharing their scary Snapchat selfies on Twitter and Instagram. 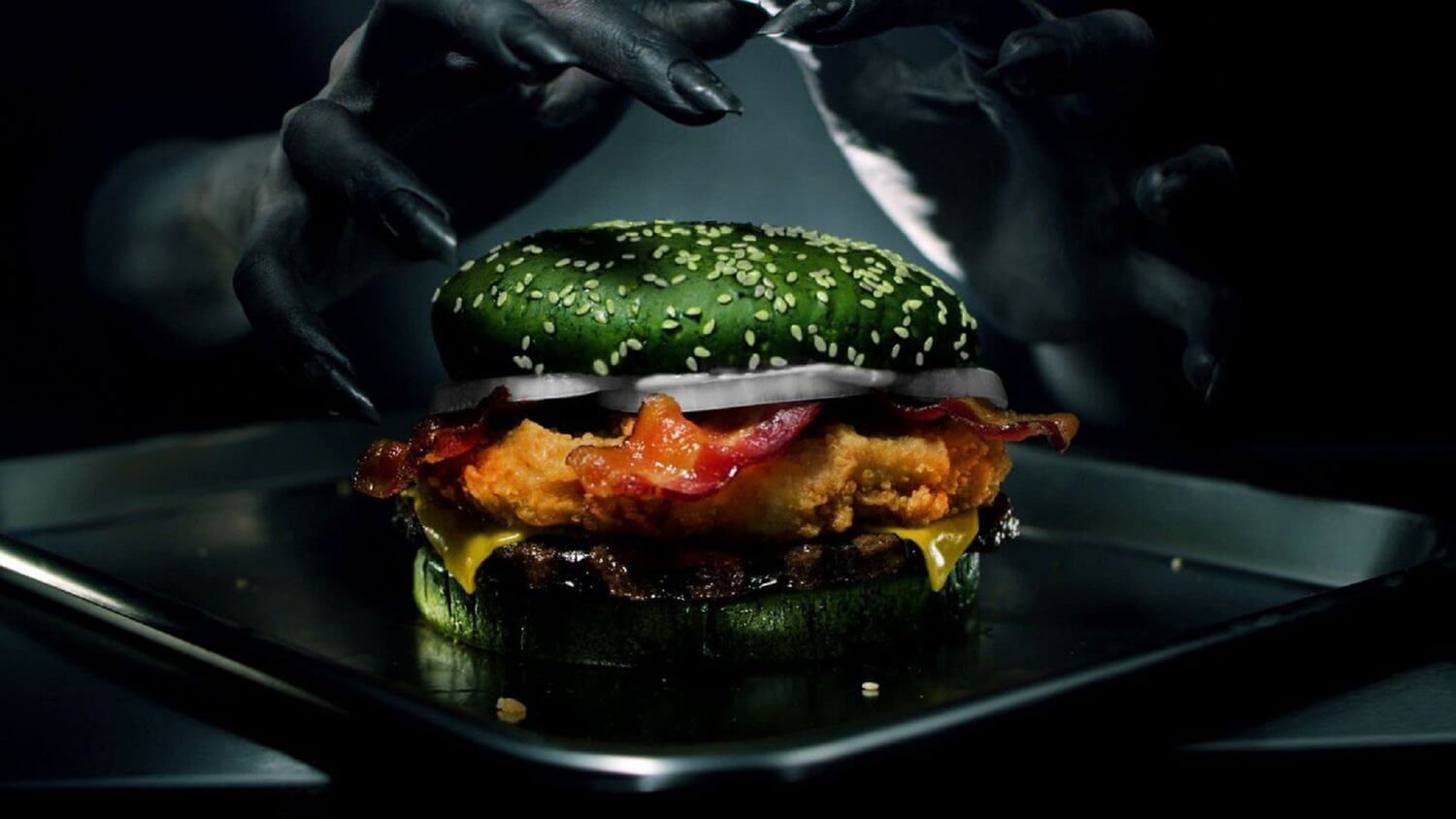 The spooky study took place over ten nights with 100 participants, who ate the Nightmare King before they went to bed and showed that nightmares are almost four times more likely to occur after eating the blasted burger. Dr. Jose Gabriel Medina, a sleep disorder specialist and the study’s lead doctor, said: “According to previous studies, 4 percent of the population experiences nightmares in any given night. But, after eating the Nightmare King, the data obtained from the study indicated that the incidence of nightmares increased by 3.5 times.”

Sold in a gruesome green wrapper, the Nightmare King is only around from Monday 22nd October to Halloween.

It wouldn’t be Halloween if we didn’t end on a nightmare of a marketing campaign! Mobile brand Giffgaff has made something of a tradition of sinister TV spots, with previous years’ adverts featuring aliens, chainsaws, clowns, zombies and creepy dolls. Each short film plays on the idea that Giffgaff’s service is better than the contracts offered by other mainstream mobile brands, with the protagonists being placed in scary situations where they must decide whether they should stay or go. 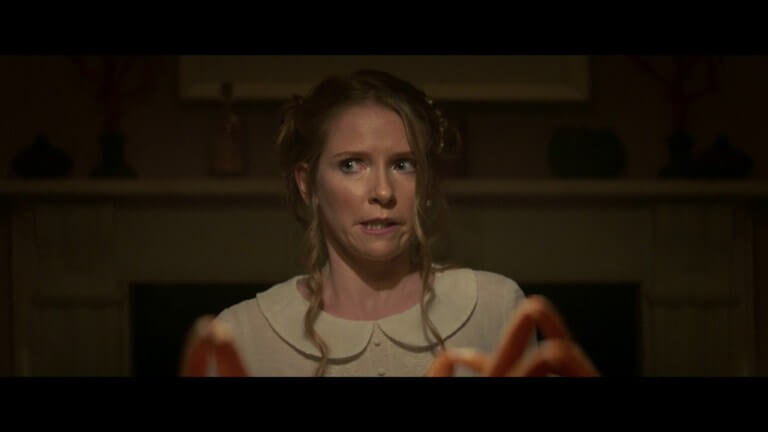 This year, their ‘Monster Family’ advert depicts an orphan girl being removed from her adopted family of Addams-esque monsters and being forced to live with normal humans. Her new human family are freakishly perfect parents who want to dress her up like a doll, make her denounce monsters and sign a contract binding her to a ‘life of luxury’. She rejects the contract and runs back to her monster family, before the ad ends with the tagline ‘stay because you want to stay’.

While some viewers applauded the campaign, others criticised the story for its negative depiction of adoption, claiming the girl was returned to her monstrous abusive kidnappers by the media. Soon after, Giffgaff pulled the ad and Head of Advertising Abi Pearl released this apologetic statement:

“We would like to say sorry. We made a mistake with our new Halloween campaign. It was never our intention to cause any offence to the adoption community, or anybody. However, we understand that, whether we meant to or not, we have. As a company that has a community at its heart, we believe in listening to people, so have taken the decision to stop running this ad.” Let’s hope the mobile moguls have better luck next Halloween!

If you’d like to find out how to avoid a nightmare marketing campaign and create a PPC or SEO strategy that dreams are made of, get in touch with us today.

View Our Resources View Our Work