A Brief Look at the Ethics of Online Marketing 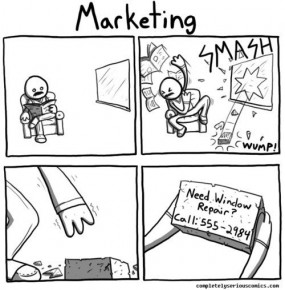 Have you ever noticed the language used to discuss matters relating to marketing, be it online or off? It is filled with words such as ‘hits’, ‘impact’, ‘targets’, ‘campaigns’ and so forth. To an outsider it might sound like demented generals discussing their campaign strategy in a war bunker. Except that their ‘targets’ would be 16-25 year old males interested in computer games, or stay-at-home mums.

The language of war used to describe so many of the activities we undertake as marketers is, of course, derived from a culture of competition aimed at inspiring productivity and growth. Agencies and other businesses are constantly placed at loggerheads with one another, in an attempt to gain greater influence within the market and increase their share of the rewards.

While this system has created massive wealth and transformed the world we live in, it is important to remember that there are downsides and that the language we use will undoubtedly affect the culture we operate in. To speak in terms of warfare is a dangerous choice, as it can blur the lines between what it categorised as a necessity and what is ethical, or even legal. We must always be aware that we are not simply dealing with targets, or tracking hits, but interacting with customers and the public at large. In that respect we have an obligation to fulfil, as do all businesses, in regards to providing value and being accountable. What is necessary is not simply completing targets, but a whole succession of other criteria.

Online industries have, in the past, been associated with many unethical practises, some of which have since been hampered by legal legislation (such as email spamming). The SEO industry, in particular, quickly became associated with cowboy operators looking to make a fast buck at the expense of legitimate businesses. Hopefully, with the growing presence of reputable, accountable agencies, the cowboys will be forced to the periphery and the sector will enter into a stage of greater maturity.

A first step would be to find ways of removing the long-existing disconnect between the numbers and the people, which is prevalent in so many computer based industries where contact with the outside world is primarily digitally based. This requires a change of focus, which admittedly is already occurring, away from the simple statistics such as number of visitors (hits), towards user satisfaction. This approach is far more people focused, as it aims to improve the experience of the customer as opposed to increasing a statistic. Such an approach will undoubtedly result in more satisfied web users and more profitable websites.

Secondly, finding ways to increase accountability and allowing the industry to shed its shadowy, opaque past and replace it with something much more transparent, would create greater trust between all parties involved. In short, a lack of accountability damages society, the banking and phone hacking scandals being prime examples of this. Neither bankers nor journalists believed they would be held responsible for their actions (and many appear to have been correct in that assumption) and therefore acted with relative impunity.

This point is particularly relevant when considering online activities, as accountability is easily lost when a practitioner or member of the public is granted the anonymity of the Internet. Disinformation can be spread with ease, while the truth can be drowned in a sea of inane babble. If this is to change, businesses must change.

Too many websites lack adequate contact information, essentially shielding themselves from any repercussions their actions may incur. Too many articles are published without proper concern for the accuracy of the information they contain, in full knowledge that the author will be virtually untraceable and the host website, most likely, apathetic. The solution is to focus on quality and adding value while being willing to stand by your words and actions and be accountable for them.

If we can achieve these changes, then the Internet will continue to develop as a tool for the expression and sharing of ideas, opinions and information, as it was originally intended, and avoid becoming a forum for the expression of bigotry and the spreading of misleading information. With it, online marketing must mature and leave the Wild West and, perhaps one day, the War Zone behind.