There are a staggering 1,551 football clubs on Twitter, amassing an impressive total of 45 million followers according to a recent Football Social Media report. Undoubtedly, football is the largest sport on the planet, but it now seems to be becoming one of the most popular topics on Twitter. As such, it’s no surprise to see football clubs have radically sought to improve their Social Media offering in the past 18 months.

Clubs initially took to Twitter without as much as a strategy, with many tending to hook the platform up to auto-tweet their Facebook or RSS feed. As demand grew and more football fans flocked to Social Media, clubs had to invest more time and effort into managing these channels and many saw potential for a lucrative alternate revenue stream. Where there has been success, there has also been hick-ups and failures – many of which are still causing problems even now. 2012 saw a string of high profile footballers including Ashley Cole, Rio Ferdinand and Joey Barton all receiving fines for controversial tweets. Clubs still need to get to grips with managing (and educating!) their staff about Social Media best practice.

With the importance of football clubs on Twitter quite evident, we’ve decided to look at which clubs have seen the fastest and largest growth on Twitter in 2012. 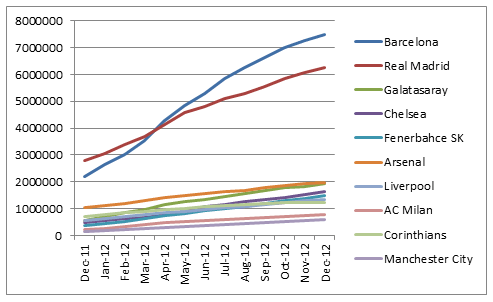 As the graph above shows, Barcelona and Real Madrid have pretty much been at war with each another off the pitch as well as on it. The Spanish giants are some 5 million followers ahead of their closest rivals Arsenal and their growth looks set to surge even more. Crucially, Barcelona overtook Real Madrid in March 2012 and haven’t looked like slowing down since.

Interestingly, whilst Arsenal have the third largest following in the world, Galatasaray, Chelsea and Fenerbahce all gained more followers in 2012 – Fenerbahce in particular had a growth rate of 312%, the highest in the top 10. Notice the absence of Bayern Munich (who joined Twitter in 2012) and Manchester United (who are the only Champions League Elite team without a club Twitter account). 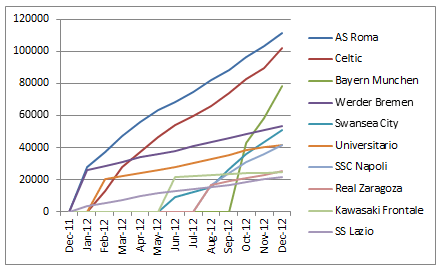 Some clubs have been slower than others joining Twitter, but 2012 saw around 400 new clubs sign up to the microblogging platform. Included in this list of clubs are some fairly big hitters, such as Bayern Munich, Celtic, Roma and Lazio. Coming out on top of our fastest growing newcomers is Italian side AS Roma, who have been a revelation to the Social Media scene – creating innovative campaigns on Twitter, Pinterest, Vine and iTunes in the last 6 months.

Closely behind is Scottish champions Celtic who have benefited from a large and passionate fan base online. Most striking however is Bayern Munich, who despite being Forbes’ 5th most valuable sports brand and valued at $179,000,000, only joined Twitter in September. However, since then, they have amassed 78,197 Twitter followers and are expected to improve   their current position as the 66th largest Twitter following worldwide.

Clubs seemed to have reached a point where they now understand the value of Social Media and particularly the value of having a robust strategy to tie in with customer service, ticketing and press. Yet, there’s still a long way to go for many clubs and the question on everybody’s mind will be – how do we monetize our Social Media?

Furthermore, as more clubs begin to invest in Social Media I believe that it won’t become a question of investing in time spent, but rather investing in content produced. Content is the lifeblood of Social Media activity, and football clubs sit on potential goldmines of engaging content that they might not even think about. In 2013, expect to see more clubs make the most out of every opportunity and try capture content wherever they are – whether that’s on the training ground, in the tunnel or outside the ground with the fans on a match day.