Local SEO in 2017: a brief guide and a look to the future

When discussing local SEO, it’s easy to lose sight of the fact it’s a discipline in of itself with many very particular factors coming into play. Google uses a different algorithm from national results for local search, so it’s important businesses are aware of these elements if they hope to improve their location-specific visibility in the SERPs.

Adding a location to the search query is one significant signal – i.e. “garden centre Leeds”. Another the location from which you’re searching. So, if you’re in Leeds and searching for just “garden centre” you will also be met with locally relevant results. The same goes for “garden centre near me”.

“Garden centre Leeds” is what’s known to SEOs as a geomodified search, whilst “garden centre” is referred to as a geolocated search. However, you won’t be met the same SERP for each of these – more on this later.

In any case, all these results will show the 3-pack: 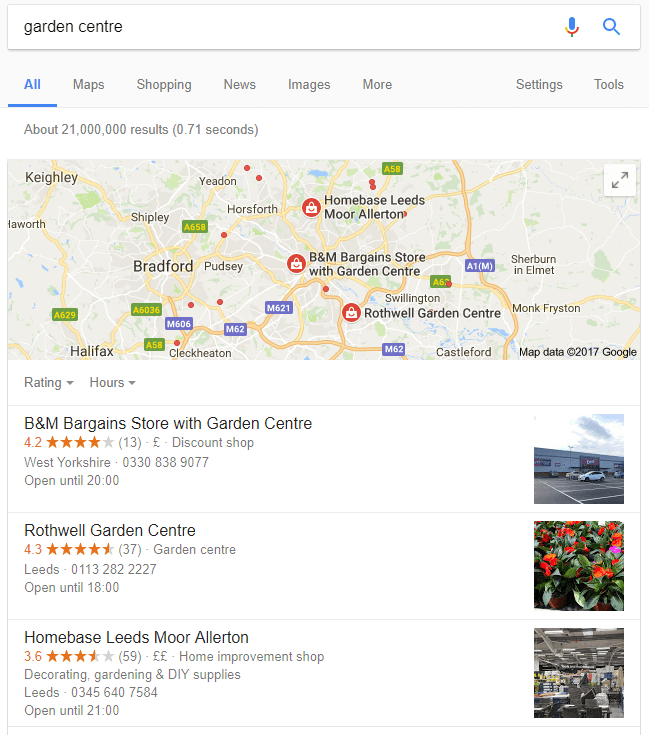 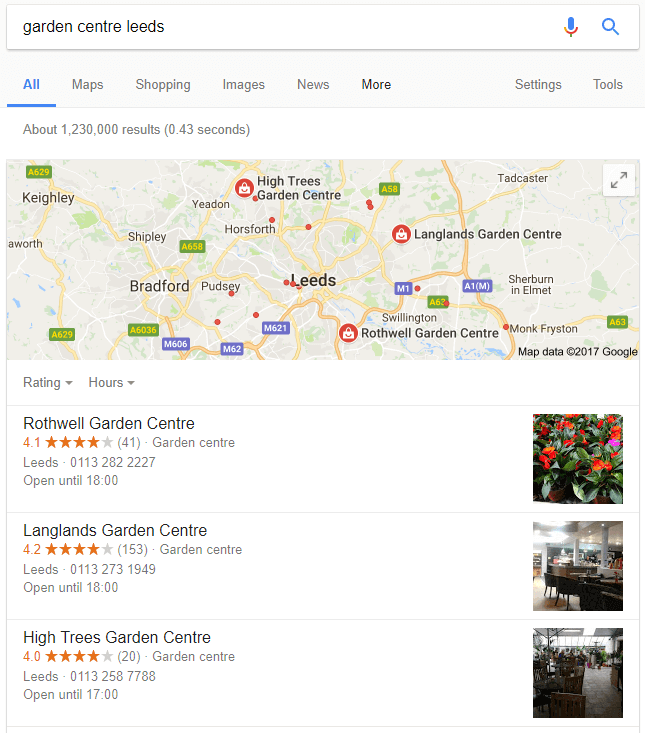 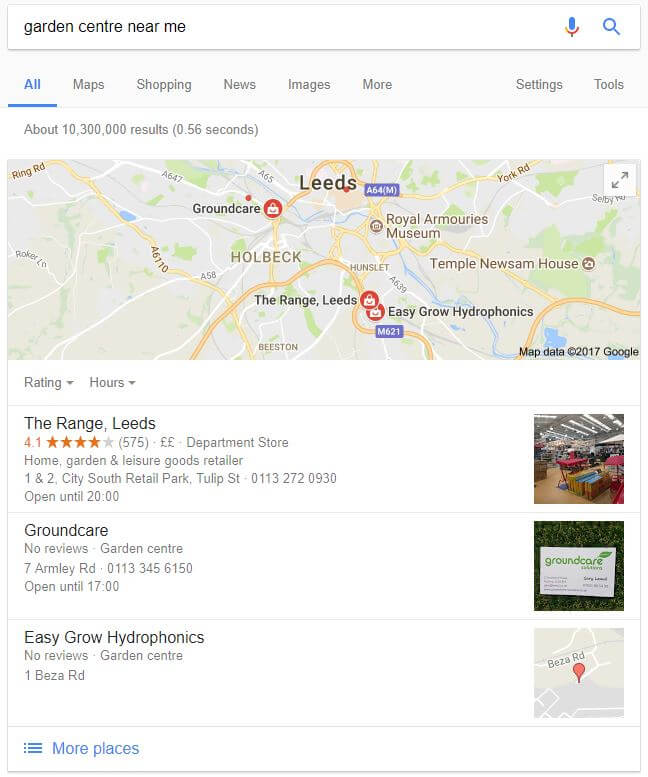 BrightLocal’s local review survey from 2014 found that 57% of people have searched online for a local business more than 6 times a year. With the continued growth of mobile (mobile users are much more likely to search for a local business), it’s likely this figure is much higher today.

Whether it’s a restaurant, café, museum, dentist, garage, tyre fitters, betting shop, garden centre or solicitors firm, there’s huge opportunity to increase your site’s traffic and ranking visibility. Even if this doesn’t create direct sales through your website, it means they’re much more likely to visit and make a purchase instore.

85% of consumers in the survey claimed that they read up to 10 reviews when searching for a business.

In local SEO, all the principles of national SEO apply as they normally would. This has been particularly so after the Pigeon update was introduced in 2014 which sought to provide increasingly relevant and useful local results that were more closely linked to traditional ranking signals.

However, there are four major additional factors to consider with local SEO: citations, reviews, local PR and Google MyBusiness.

Setting up a Google MyBusiness is widely considered to be the single most important thing a small business should do. The first thing you need to do is to claim your listing. It’s crucial that all the details added are 100% correct, up-to-date and match the information (name, address and phone number) that appears on your site.

What are the main ranking factors in local SEO?

Google has recently announced how which factors play a part in local SEO, and how it decides on when your business is shown in local results.

It should also be remembered that rankings factors are weighted differently when it comes to ranking in the Local Pack or rankings organically for localised search. For example, GMB signals, citations and reviews are more important for the former whilst for the latter, link signals and on-page signals are more important. 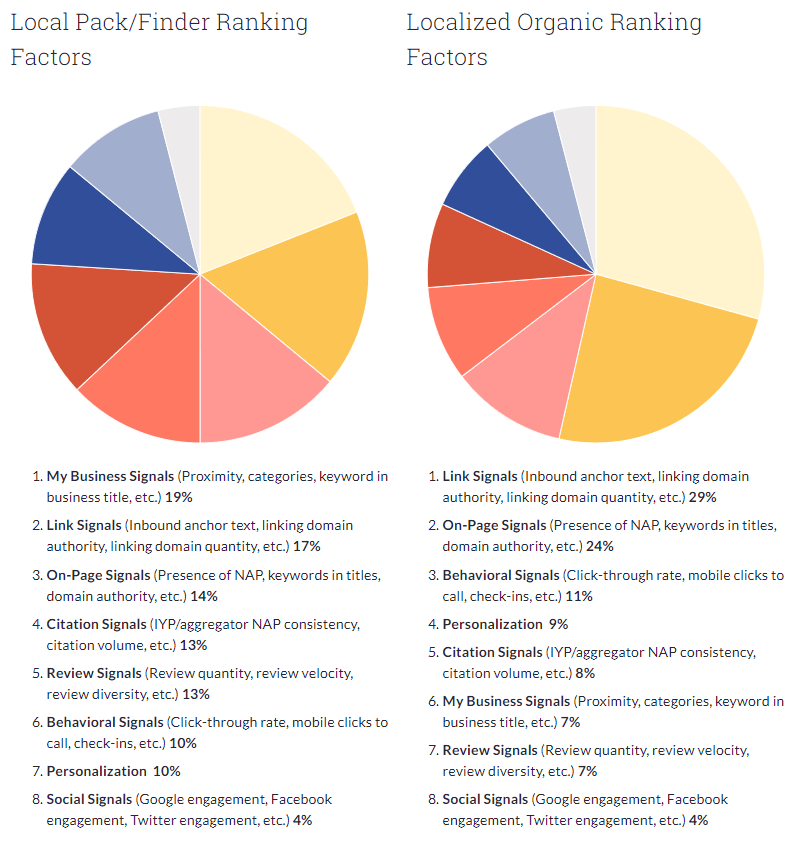 Citations are still an important, albeit sometimes overlooked aspect of local SEO.

When it comes to building citations, consistency is key. Many small businesses who submit themselves to directories need to ensure that the Name, Address and Phone Number (NAP) remains consistent across the board.

Additionally, businesses should only ever add themselves to a quality directory – much like building links, building citations should never be a numbers game.

What makes a good citation?

The internet is full of directories – some good, some not so good. Most of these citations come from these directories. Directories can broadly be put into three categories:

All sites properly optimised for local SEO should have the NAP appear in the footer. This should match exactly the NAP submitted to directories.

Whilst a site can’t rank on citations alone in all but the least competitive of niches, they can work wonders in moving the needle as far as rankings are concerned.

How far has local SEO come?

20% of commercial searches on Google are now location specific, with most of these searches taking place on mobile. 56% of all searches on mobile demonstrate local intent. This all means that local businesses now have a fighting chance to appear in the most prominent positions for relevant keywords as national businesses are algorithmically excluded from the 3 Pack.

Unsurprisingly, as the number of local searches has increased, so too has the competition between businesses to optimise their sites for local. Whilst in the past you could achieved maximum SERP visibility with a few citations and links, nowadays it’s become significantly more difficult for a variety of reasons, some of the main ones being:

In terms of significant changes to Google’s algorithm, the two major updates associated with local SEO have come out in the past year or so. The first of these is the Possum update which was introduced September 2016.

Post-Possum, the closer you are to a business’s address, the more likely you’re likely to see it in the SERPs.

Possum is the reason the SERPs give different results for similar search terms which signal the same intent, as I discussed at the start of this post.

Before the Possum update, if the physical location of the business was deemed by Google to be outside the city’s boundaries, local SEO could prove to be a thankless task. Post-Possum, this radius has expanded.

The major losers of the Possum update were businesses that shared the same physical address as other competitors (sharing the same offices for example). Competing businesses in too close a vicinity could also be filtered out in favour of more sparsely located businesses.

The Hawk Update, which rolled out on 22nd August 2017,  closed this filter gap somewhat so that businesses in closer proximity to one another wouldn’t be filtered as harshly as previously.

Optimising locally for Bing: is it worth it?

One question small businesses may ask is whether it’s worth it to optimise their site locally for Bing.

Bing is often ignored by many SEOs, particularly when it comes to local search. With the bulk of search traffic coming from Google, it’s easy to see why optimising for other search engines could seem a waste of time.

Bing is the second most popular search engine after Google, with a market share of 11.06% in the UK, and it boast billions of monthly searches.

Bing Places is the Microsoft equivalent of GMB. It’s free and straightforward to set up and much like GMB the key to success is accuracy and consistency in your business description.

Since less businesses are likely to set up Bing Places than they are GMB, there’s less competition when it comes to securing visibility at the top of the SERPs for local searches.

All this means that setting up Bing Places is definitely worth it as the small amount of effort could win your business some value local leads that would be lost out on otherwise.

We’ve seen significant changes in local SEO in recent months: from the original Possum Update to the Hawk update on 22nd August 2017.

As for the future of local SEO, Local SEO expert David Nihm predicted earlier this year that in the next few years traditional SEO and local data will shrink in relative influence whilst Google will increasingly take various engagement signals into account. There is some evidence to suggest Google is already using a site’s dwell time as a ranking factor.

For the time being though, the main factors discussed early – citations, reviews, local outreach and GMB – will continue to have the most impact on rankings.

Whilst local SEO has become increasingly sophisticated since Possum, there are still aspects of local SEO that continue to irk small businesses – perhaps the main one being that business’ listings can still be edited by competitors, often in an attempt to negatively impact their search rankings.

Whilst it may seem that the real estate up for grabs on page one is shrinking (after all the 3 Pack did used to be the 7 Pack not that long ago), local SEO is still a must for local businesses if they want to maximise customers’ engagement through Google.