NetBet, one of the world’s most widely enjoyed betting operators, challenged the Blueclaw team to create a compelling piece of interactive online content that would build their brand internationally.

As sporting pride gripped the world during Euro 2016, we created The Multicultural Championship – a powerful and unique data-set that revealed for the first time the real diversity of players in the tournament with the goal of capturing headlines, engagement and earning top tier international links.

The Multicultural Championship exceeded expectations and resulted in widespread coverage both nationally and internationally.

The project had multiple objectives:

A data-driven and interactive content marketing asset that contained fascinating insights about player migration and team eligibility, the Multicultural Championship illustrated the global nature of football.

This campaign was researched, created and promoted by Blueclaw, positively placing the brand at the heart of the conversation about sport, migration, Brexit and more….while earning top tier links for off-site SEO value. 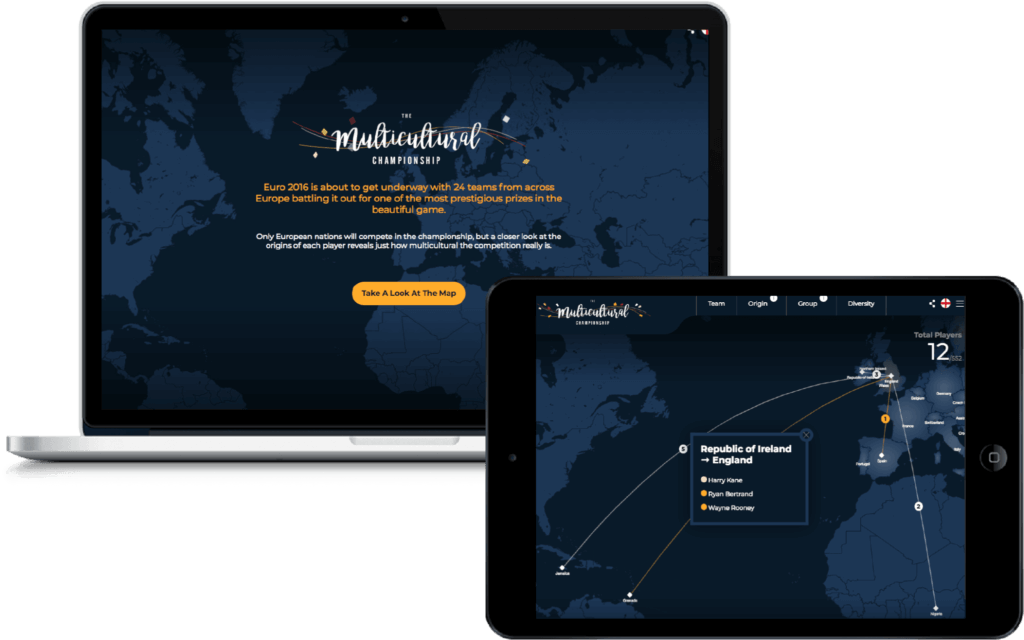 The Multicultural Championship illustrated the truly global nature of football, positively placing the brand at the heart of the conversation about sport, migration, Brexit and more.

The impact was clear:

The concept was immediate to grasp, and irresistible to engage with due to the myriad of ways player and team data could be explored and the many and varied stories that the data told.

In-depth research and interactive visuals told this story – a celebration and illustration of the national origins of all 552 players, allowing visitors to explore the diverse heritage of players, their parents and grandparents.

Visually this was achieved via a dynamic, interactive map that used flowing country-to-country animation to show European footballers’ worldwide roots that could be explored in 12 languages, easily uncovering their own stories related to the different teams.

Set against the ongoing political and social debate about migration, the UK EU membership referendum, identity and culture also meant there was significant scope to become part of the wider international conversation in a way that positively reflected the brand.

Importantly, by capitalising on the narratives of these mainstream media topics, data-driven content could be created without presenting any barriers to those unfamiliar with sports betting.

Get in touch with our senior team to discuss all things Content Marketing and Digital PR!