in top 20 Rankings in One Month

Leaders in the sports tipping and betting markets, OLBG are an online betting guide known for their knowledge and informative tips to help sports bettors place bets online.

With the pause of live sport in response to COVID-19, we were able to utilise OLBG’s knowledge of growing areas, such as eSports, to highlight their expertise and continue to drive traffic during uncertain times.

Through our “Fans of the EPL” and “Gaming Habits” campaigns, we were able to use the lack of live sports and new sporting media trends to our advantage and build authoritative and new linking domains pointing to the OLBG website. This provided invaluable exposure to the OLBG brand across a range of relevant outlets.

We managed to build over 140 links to the site – with half of those coming since the UK lockdown – and achieved 215 individual pieces of coverage, which resulted in a 762% increase in eSports betting rankings and a 550% increase in top 20 rankings.

Due to the impact of COVID-19, a lot of our planned activity for OLBG quickly became obsolete after the sporting calendar was left in tatters and events such as the Grand National were cancelled.

The challenge for the team was to quickly devise a new strategy that could be quickly turned around, hijack the new media trends and build authoritative links to the OLBG site.

With our focus solely on sports and OLBG keen to mark themselves out as experts in sports tipping, we decided to look into ways in which sport was being consumed even during the UK’s lockdown period by looking at attendance figures at local football matches (before official lockdown), the rise in people playing online football games and how the potential cancellation of the Premier League season would affect teams financially.

The initial postponement of the Premier League meant that fans were without football for one weekend before the country was locked down. However there was still active in local leagues, and through the simple gathering of attendance figures at the highest level possible (the eighth tier of English football) before and after the Premier League being cancelled, we were able to show the percentage rise in overall figures and turn a fresh press release around quickly with a simple data table included.

The success of this angle showed that there were sports journalists with a lot of room to fill online, and fans were looking to consume sport in a different way to usual. With that in mind and after members of the team resorted to playing on Football Manager, we looked into Steam’s database of live players. 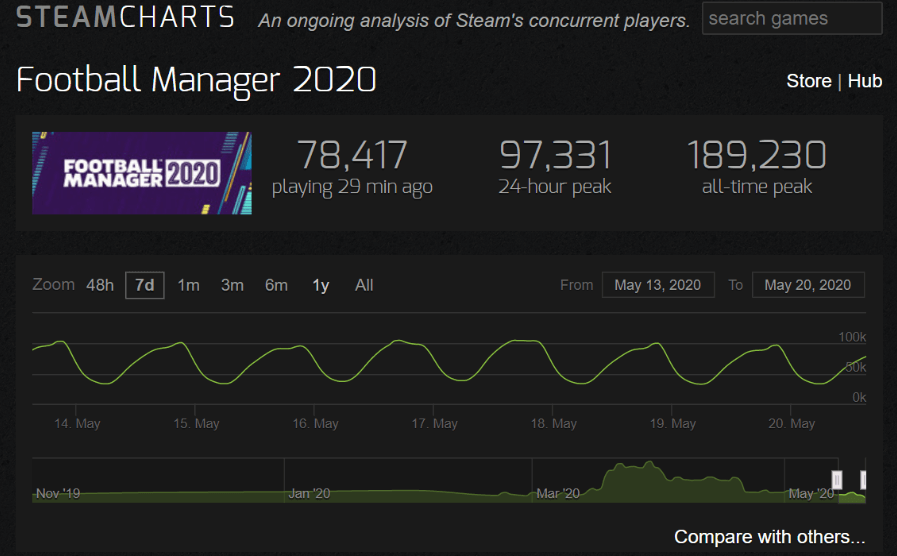 With the help of our data team, we were able to pull all the playing figures of Football Manager across each edition for the past eight years, and study the trends. What our research showed was that there had been an all-time peak in users on the game in March 2020, just 10 days after the lockdown was started which gave us the perfect headline to reach out to journalists with.

Our final angle of outreach that proved to be successful was looking into the amount of money awarded to each team in the Premier League. With lots of talk in the media over the league being cancelled and teams arguing over promotion and relegation mainly due to the money involved, we produced a simple infographic looking at the how much would actually go to each team if the season were to end now. This tied in nicely with the Fans of the EPL piece, as we had already provided a section on the money that goes to the Premier League from TV broadcast deals, and it proved to be a big hit with regional papers.

106 followed links with an average Domain Authority of 45

70 pieces of coverage since the UK lockdown

41 pieces of coverage with a DA of more than 70

Get in touch with our senior team to discuss all things Content Marketing and Digital PR!